46.15
-0.310 (-0.67%)
リアルタイムデータ
マーケットオープン
46.15
The Blockchain that Brings Privacy to the Masses
2021年12月20日 - 06:20PM
NEWSBTC
In 2009, Satoshi Nakamoto released Bitcoin unto the world, and with it, a technology with the potential to define the next century: blockchain. As a default, blockchains secure transactions with a level of privacy exceeding that which is achievable through centralized payment networks. Consensus mechanisms such as Proof of Work (PoW) and Proof of Stake (PoS) provide methods for decentralized consensus, allowing cryptocurrency networks to settle transactions without a centralized authority. However, experts amongst the cryptocurrency community are expressing concern over whether this level of privacy is enough given developments in modern anti-privacy technologies. Blockchain: Private or Not? Banks and centralized payment networks like Visa have no choice but to record personal transaction data – sender and receiver names, amounts, times, locations, and often the types of goods or services purchased – in order to facilitate the movement of money and protect users from fraud. While blockchains are advantaged in this regard, the privacy they provide is not perfect. Sender and receiver wallet addresses, as well as transaction amounts, are stored permanently on blockchains for all to see. Bitcoin.org describes how this applies to the Bitcoin network: “All Bitcoin transactions are public, traceable, and permanently stored in the Bitcoin network. Bitcoin addresses are the only information used to define where bitcoins are allocated and where they are sent. These addresses are created privately by each user’s wallets. However, once addresses are used, they become tainted by the history of all transactions they are involved with. Anyone can see the balance and all transactions of any address.” To combat this, many have turned to tumbling services that send transactions through a plethora of wallet addresses in an attempt to obfuscate transaction origins and destinations. However, both researchers and adversaries have had 12 years to crack high-volume blockchain transaction tracing. Today, blockchain analysis software makes it possible to rapidly trace tumbled transactions and associate wallet addresses with each other. Further, most people enter the cryptocurrency market through centralized exchanges like Coinbase which require their members to pass KYC (Know Your Customer), a process used to verify the identities of individuals in accordance with regulations. This means that all transaction chains originating from centralized exchanges are traceable and easily tied to their members’ real identities. Clearly, an upgrade is needed if our financial privacy, and to an extent, our freedoms, are to survive modern blockchain tracing techniques and encroaching regulations. Improving Blockchain Privacy Some cryptocurrency projects, aptly named “privacy coins”, have taken it upon themselves to solve the privacy gaps in previous-generation blockchain protocols. Monero, Zcash, and PIVX are popular options, but concern over whether they have kept up with evolving privacy needs grows within the cryptocurrency community. Many security experts are instead turning to Navcoin, a future-oriented privacy project that supports public transactions through its NAV token and completely private transactions through its xNAV token. xNAV uses Navcoin’s self-developed privacy protocol “blsCT” to protect transaction data from prying eyes. BlsCT does so by combining all transactions within a block into one, then distributing xNAV tokens to wallets without revealing their addresses or balances to the public. This effectively breaks the link between transaction inputs and outputs, making it impossible to identify which wallets participated in which transactions. xNAV takes user privacy even further by solving a threat factor that most cryptocurrency users are not aware of: IP tracing. When a transaction is sent through a cryptocurrency network, the sender’s IP is revealed to neighboring nodes. This means that transactions can be associated with IP addresses, making it possible to trace the physical origination of transactions. xNAV solves this using another innovative technology, Dandelion++. With it, sender IP addresses are initially sent to a single node, which then connects to a different node and acts as the original sender. This chain continues a random number of times, obfuscating the original sender’s IP address, making it impossible to correlate transactions with IP addresses. A High Utility Privacy Platform While Navcoin’s privacy protocols are impressive, they aren’t the only reasons behind Navcoin’s recent attention. Navcoin will soon begin offering privacy as a service, transitioning into a high utility privacy platform that can be used by other cryptocurrencies to attain total privacy. This will drastically increase the demand for Navcoin, as all network fees will be paid with it. As part of its offerings, Navcoin’s platform will support Private Tokens and NFTs, allowing users to mint NFTs along with tokens pegged to the values of other assets, all with the same privacy-preserving aspects used by xNAV. The implications of this are broad – including the potential for users to mint private versions of cryptocurrencies, and trade privately, removing KYC from the process of gaining exposure to mainstream cryptocurrencies like Bitcoin and Ethereum. As revolutionary as it is, blockchain technology needs an upgrade if it’s going to keep up with the anti-privacy tactics of institutions and adversaries. Navcoin leads the way with xNAV, an innovative privacy coin that solves today’s privacy concerns.
Zcash (COIN:ZECUSD)
過去 株価チャート
から 1 2023 まで 2 2023 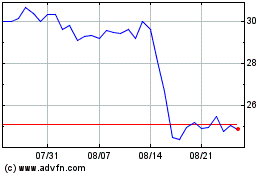 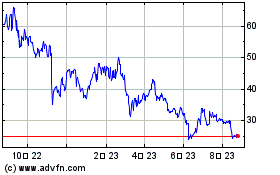 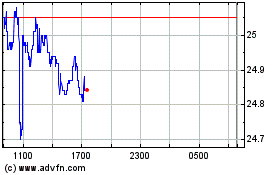