138.92
-92.50 (-39.97%)
リアルタイムデータ
マーケットオープン
138.92
Monero Climbs To 5-Week Peak, Nears Key Resistance At $155
2022年7月22日 - 09:12PM
NEWSBTC
Monero (XMR) spiked to its peak levels in three months, in the face of challenges in the crypto market. XMR has been gaining momentum since June 13 as it has been enjoying highest highs over the past few months. The token has been on an uptrend for the fourth day in a row and today it’s at fever-pitch with an intraday high beaming at $153.09 3hich is considerably the highest gain it has had since June 13. With this big move, XMR/USD has set its targets on a new resistance level at $155, which will be considered as the price ceiling for many traders. This new price ceiling will come in tandem with another resistance level. Monero Going For A Bull Run At $175 Two things can happen: The bears might look at the market scenario as being overbought and will then reenter or can even push other bulls to vacate their recent positions. On the other hand, if a breakout happens, then Monero could push for a bull run toward a higher ceiling eyed at $175. XMR was able to breach its support zone and is now trying to retest the trendline. XMR is currently going for an ascending triangle pattern. Suggested Reading | Binance Coin Trading Volume Up 35% As BNB Spikes To $274 The XMR/BTC pair soared by 0.67% in market cap and is currently trading at 0.006390; evident in the past 24 hours. XMR is showing a downtrend after it has successfully breached the long-term resistance zone and has turned the supply zone now at $135. It has been retesting that resistance level by forming higher highs and higher lows. It has now tried doing the contrast and forming lower lows and lower highs for a shorter time frame. XMR total market cap at $2.76 billion on the daily chart | Source: TradingView.com The Monero coin has been showing a bearish movement as it was able to cross the long-term demand zone. The bearish trend has caused the breakdown set at $200 giving away a sell-off signal. Now, the coin is trading under the supertrend line which works as a resistance. So, if XMR can break out of its triangle pattern, it will show a bullish streak in price. If it cannot sustain the supertrend line of $200 then the price can further drop to $100. Suggested Reading | Cardano (ADA), After 35% Spike, Locks On Next Target: $0.55 XMR Forms Falling Wedge Pattern If the $135 supply zone is breached, then this can push the price up to $175. XMR is currently forming the falling wedge pattern as it shoots for lower lows and lower highs. Consequently, the Average Directional Movement Index (ADX) has slumped over the past few days and it even further dipped below 20 with coin facing rejection at the $135 zone. On the brighter side, the ADX curve is now seeing some recovery and went for an uptrend. Overall, it’s looking bullish for the crypto as of press time with the resistance zone falling in between $135 to $175. Featured image from Coin Central, chart from TradingView.com
Monero (COIN:XMRUSD)
過去 株価チャート
から 9 2022 まで 10 2022 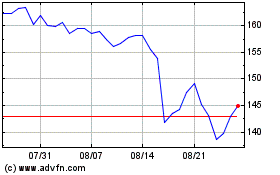 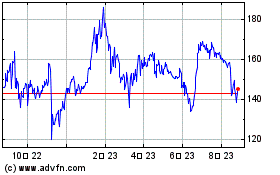