1.00
0.00001 (0.00%)
リアルタイムデータ
マーケットオープン
1.00
Tether Asset Reserves Figures Record Significant Plunge Compared To 2021
2022年8月20日 - 08:30PM
NEWSBTC
Following the collapse of Terra and its ecosystem, there is a considerable reduction of confidence in stablecoins, especially Tether. Most participants in the crypto space have increased doubts about the level of stability with stablecoins. While many are treading more caution on most projects, some have made a complete back-out. That’s why the pressure has risen on some of the top stablecoins. Investors have been demanding more transparency in the reserves that back them up. Tether USDT is the leading stablecoin and has received several demands to disclose its reserve to the public. Related Reading: Investor Sentiment Falls As Crypto Market Sheds $100 Billion In a recent development, Tether has finally revealed the details of its reverse to the public. The firm did so on Friday during the announcement of its collaboration with BDO Italia, a public accounting company. The statement from the backing firm for the stablecoin indicated that Tether has up to $66.4 billion as its reserves. Also, the company mentioned that it has cut down its backing, which was holdings commercial paper against its report for the previous quarter. Currently, the firm stated that it is maintaining more of its holdings as cash and bank deposits which had risen by 32% within the quarter under review. The company cited its plan of eliminating commercial papers as part of its reserves. It said within the last quarter; that the stablecoin reduced its holdings on commercial papers by over 58%. Also, Tether mentioned that it would provide updates regarding issued tokens and reserves daily. And it plans to be releasing assurance opinions monthly. Finally, Tether maintained that it had proved the robust nature of its operation and its reserve management for careful practices. Tether Total Assets Value Decreases According to the report from BDO for the end of June, Tether’s assets are worth about $66.4 billion. This indicated a drop of about $16 billion between the two quarters for the stablecoin. The consolidated total liabilities for Tether are at $66.22 billion in the quarterly report. But most of them are digital token issuance. Tether reiterated that its report displays its resiliency and ability to stand firm through other storms. Also, it’s a measure of its commitment to transparency to its users and the general public. Additionally, the firm has expressed that transparency and accountability would remain its core value. It revealed its plan to release data monthly to facilitate more progressive moves toward openness. Related Reading: Ethereum Sends Red Signals, But Should You Worry About The Long Term? This is a new change from its old practice of providing a quarterly report of its operations and standing. In addition, USDT disclosed its new official partnership with a new accounting company. Featured image from Pixabay, chart from TradingView.com
Tether USD (COIN:USDTUSD)
過去 株価チャート
から 11 2022 まで 12 2022 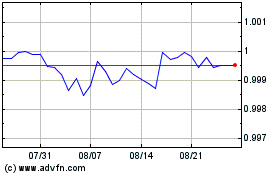 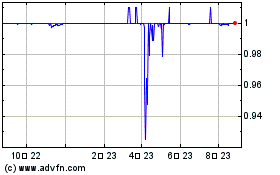 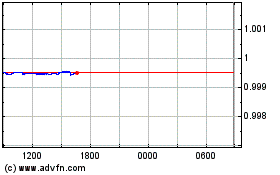