0.96101
-0.03759 (-3.76%)
リアルタイムデータ
マーケットオープン
0.96101
Crypto Market Analysis: December 6, 2021
2021年12月8日 - 03:25AM
NEWSBTC
Bitcoin and ether suffered a major flash crash over the weekend, sending cryptoasset values down by some 20% at points. Prices have now recovered somewhat but both cryptos remain trading well below pre-weekend levels. Bitcoin began last week trading in the $57,000 range, with some movement during the week, but nothing remarkable. This changed on Friday however as the cryptoasset began to fall precipitously. BTC declined to a low of $45,412 in a matter of hours – a near 20% collapse. Ether likewise fell victim to the flash crash. Having traded up toward $4,700 midweek ETH began to fall in trading on Friday from around $4,600 to a low of $3,652 – a fall of over 20%. Both cryptoassets have regained a measure of stability since, with prices rebounding modestly. BTC is now trading around $47,900 while ETH is trading around $4,000. Speculation has been rife over what caused the flash crash, with some analysts citing the expiry of leveraged positions. Other evidence meanwhile points to significant increased activity with investors moving cryptoassets from wallets to exchanges – making reaction to price movement more precipitous when it comes. The wider backdrop of investment market fears over Omicron seems to be in play too however. Bitcoin spot ETF launches in Canada Major asset manager Fidelity Investments has a bitcoin spot ETF in Canada. The ETF – named the Fidelity Advantage Bitcoin ETF invests directly in bitcoin or through derivative instruments. At least 98% of the ETF’s holdings will be stored in cold wallets. The fund is listed on the Toronto stock exchange with the ticker FBTC. The fund will have a 0.4% management fee for investors with customers given the option of investing via Canadian or US dollars. Canada is a popular destination for crypto ETFs with more than 20 available to Canadian investors. Fidelity’s offering however is unique among crypto ETFs in offering physical holdings of bitcoin rather than trading on futures. MercadoLibre to accept cryptoassets Major Latin American online marketplace MercadoLibre now allows customers in Brazil to exchange and pay for products in cryptoassets. The firm has announced users in Brazil will be able to buy, hold and sell bitcoin, ether and a U.S Dollar based stablecoin, Pax Dollar. The combination of two major cryptoassets and a stablecoin on MercadoPago, the payments platform of MercadoLibre, will enable customers to conduct transactions for products priced in fiat currency using their cryptoassets. MercadoPago is authorised by Brazil’s central bank, making it easier for the firm to begin its crypto operations there. But MercadoLibre more generally operates in many Central and South American countries, suggesting a potential customer base for new crypto payments of millions as it expands its offering. Square rebrands in wake of Dorsey Twitter departure Payments firm Square has announced it is rebranding to ‘Block’, days after its chief executive Jack Dorsey stepped down as head of Twitter. The company said in its announcement the new name had many associations, but among them was the use of Blockchain technology in some of its projects. Square Crypto, a separate initiative of the firm which aims to promote the use of bitcoin is also changing its name to Spiral. The Square brand won’t be disappearing though – Square remains the name of the firm’s seller business, which is among a stable of brands that now also includes Cash App, TIDAL and TBD54566975. Jack Dorsey announced his sudden departure from Twitter last week, with many speculating he would move to focus more of his time on crypto and blockchain projects, with his now rebranded firm Block at the forefront of this. Meta crypto head departs firm The head of Meta’s (formerly Facebook) crypto arm is departing the firm as the launch of stablecoin Diem remains in doubt. David Marcus announced he would be departing the firm after seven years, having worked on Meta’s financial offering since May 2018, when the company’s Libra crypto project was first announced. The project later morphed into a payments wallet called Novi with the cryptoasset to go with it called Diem. The crypto wallet has since launched, but the launch of Diem remains elusive. Meta has faced significant hurdles in the launch of its crypto products. Commenting on the departure, Meta chief executive Mark Zuckerberg commented on Marcus’s post: “We wouldn’t have taken such a big swing at Diem without your leadership, and I’m grateful you’ve made Meta a place where we make those big bets.”   This is a marketing communication and should not be taken as investment advice, personal recommendation, or an offer of, or solicitation to buy or sell, any financial instruments. This material has been prepared without having regard to any particular investment objectives or financial situation, and has not been prepared in accordance with the legal and regulatory requirements to promote independent research. Any references to past performance of a financial instrument, index or a packaged investment product are not, and should not be taken as a reliable indicator of future results. All contents within this report are for informational purposes only and does not constitute financial advice. eToro makes no representation and assumes no liability as to the accuracy or completeness of the content of this publication, which has been prepared utilizing publicly-available information. Cryptoassets are volatile instruments which can fluctuate widely in a very short timeframe and therefore are not appropriate for all investors. Other than via CFDs, trading cryptoassets is unregulated and therefore is not supervised by any EU regulatory framework. Your capital is at risk.   Image: Pixabay
Pax Dollar (COIN:USDPPUSD)
過去 株価チャート
から 12 2022 まで 1 2023 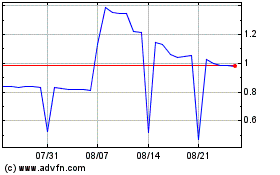 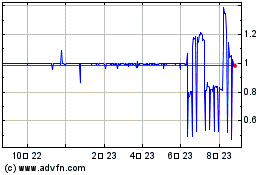 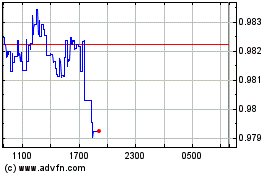