8.27
-0.200 (-2.36%)
リアルタイムデータ
マーケットオープン
8.27
ApeCoin Climbs 22% After Snoop Dogg-Eminem Bored Ape Video Launch
2022年6月27日 - 06:58PM
NEWSBTC
ApeCoin (APE), the native Ethereum currency of the famous NFT collection, is one of the fastest-growing NFT and Metaverse crypto projects in the blockchain ecosystem today. Upon its March 18, 2022 launch, ApeCoin instantly began a parabolic climb. The rally’s apex allowed Apecoin’s market capitalization to reach $7.45 billion. The APE token was valued at $4.92 at the time of writing, down marginally from its morning high of $5.26. In the past week, ApeCoin has increased by more than 35%. As of Friday, intraday trading volume for APE has plummeted by 43%. This indicates that APE is receiving peer selling pressure and is approaching the consolidation phase’s bottom trendline. The volume to market cap ratio of the coin is 0.3129. Suggested Reading – Uniswap Slingshots 45% – Can UNI Blaze Past Its 7-Day Rally? ApeCoin Getting Some Lift From Rappers The price of ApeCoin reached an all-time high of over $27 in late April ahead of virtual land NFT sales for the Bored Ape Yacht Club’s Otherside metaverse game. ApeCoin holders can vote on ApeCoin DAO governance proposals using ApeCoin. The recent price increase of APE may have been partially prompted by the release of a new music video featuring Snoop Dogg and Eminem as animated versions of their Bored Ape avatars. In the music video for their new single “From The D 2 The LBC,” Snoop Dogg and Eminem get stoned and transform into animated versions of their BAYC avatars. The song debuted at the conclusion of this year’s ApeFest, an annual New York event for BAYC NFT holders. At the end of last year, Eminem purchased his Bored Ape for 123.45 ETH (USD $452,000). His OpenSea account, Shady Holdings, displays 26 additional NFT purchases. APE total market cap at $1.47 billion on the daily chart | Source: TradingView.com Snoop Dogg & Eminem Video Fly High Snoop Dogg possesses numerous NFTs and has long been steeped in cryptoculture. He exposed himself to be the popular NFT Twitter user Cozomo di Medici a year ago. In February, he declared his intention to transform Death Row Records into an NFT label. The duo’s music video, which was trending on YouTube over the weekend, has received more than 7.5 million views. ApeFest, which occurred in New York the same week as NFT NYC, featured performances by, among others, Haim, LCD Soundsystem, Lil Wayne, Future, and Lil Baby. Over the past 24 hours, the price of ApeCoin has climbed by 12.68 percent because of strong positive momentum. Despite the fact that APE has produced its second consecutive green weekly candle on the price charts, it is still 82 percent below its all-time high reached in April 2022. Suggested Reading | Sandbox (SAND) Blows Up 20% Over Last 24 Hours Following ‘Takeover’ Rumors Featured image from SouthPawer, chart from TradingView.com
Uniswap (COIN:UNIUSD)
過去 株価チャート
から 7 2022 まで 8 2022 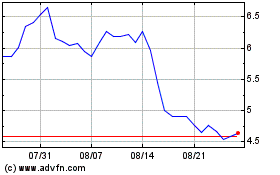 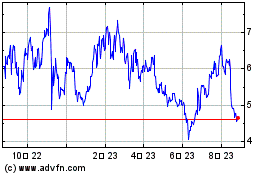 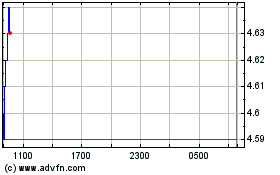