709.09
-0.360 (-0.05%)
リアルタイムデータ
マーケットオープン
709.09
Ethereum L2 TVL Enjoys 284% Growth In The Past Month Ahead Of Goerli Merge
2022年8月11日 - 11:35AM
NEWSBTC
Total value locked (TVL) on Optimism, a layer-2 scaling solution for the Ethereum blockchain, has increased 284% in the last month, according to data from DefiLlama. Users lending and borrowing assets on Aave through Optimism’s layer-2 chain make up the vast majority of TVL. Ethereum Optimism TVL Surges In anticipation of The Merge update, which will see the blockchain switch from a proof-of-work network to one based on proof-of-stake, investors have been bidding up digital assets tied to the Ethereum ecosystem. The merge will be tested by Ethereum developers on the Goerli testnet on Thursday, August 11. If everything goes according to plan, the mainnet merging will be approved on September 19. The mainnet merge would probably be delayed if there are issues with the Goerli merge. The Merge’s anticipated launch date has been set for September 19, according to a recent Ethereum developer call. With Rollups, or off-chain computations, Optimism, an Ethereum layer-2 blockchain, aims to extend the ecosystem and expedite transactions. On Optimism, transactions are entered, and on Ethereum, they are completed. ETH/USD trades at $1,853. Source: TradingView The project is home to 35 protocols, including automated market maker Velodrome, decentralized exchange Uniswap, and derivatives exchange Synthetix. The Ethereum blockchain’s current capacity of 30 transactions per second is inadequate to manage the enormous amount of user trade orders on exchanges (including cancellations). Nevertheless, according to some analysts, the network might scale to 100,000 transactions per second with The Merge upgrade, with layer-2 solutions improving this capacity even further. Related Reading: Uniswap Price Falls Below $9 After It Met With A Sell-Off, What’s Next? Optimism blocks are constructed and executed on layer-2 while user transactions are batched up and submitted to the Ethereum layer-1. On layer-2, transactions are immediately accepted or rejected with no mempool, enabling a fast user experience. Correspondingly to the TVL development, the project’s namesake tokens have also rallied by 300% during the same period. Dai on Optimism 👀 From 30 million to 140 million in 5 days. pic.twitter.com/AQlNWvX6c9 — Maker (@MakerDAO) August 9, 2022 Goerli Testnet: A Brief The Ethereum network will be one step closer to its biggest update yet in less than 24 hours. The second-largest cryptocurrency by market capitalization has been preparing to switch from Proof-of-Work (PoW) to the significantly less energy-intensive and, in some people’s opinions, more decentralized Proof-of-Stake for years (PoS). Senior Ethereum developers stated last month that the so-called “Merge” to “Ethereum 2.0” will occur on September 19. However, there is still a challenge for developers to overcome before the “Merge” can be implemented on Ethereum’s mainnet. Developers want to implement the merging on one last testnet after completing the switch from PoW to PoS on two of Ethereum’s main testnets (Ropsten and Sepolia) in June and July. From its mid-July lows under $1,000, Ethereum has increased by more than 80%, and at last check, it was trading in the mid-1,800s. While most of this has coincided with a larger cryptocurrency market rebound amid an uptick in macro mood (Bitcoin is up over 25% from its mid-July lows), analysts have indicated that anticipation ahead of the merger has been a key tailwind driving ETH higher. Related Reading: Why Are Crypto Investors Rotating From Bitcoin To Altcoins? Featured image from iStock Photo, chart from TradingView.com
Maker (COIN:MKRUSD)
過去 株価チャート
から 8 2022 まで 9 2022 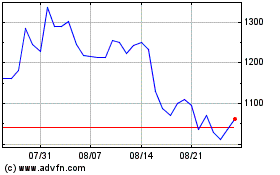 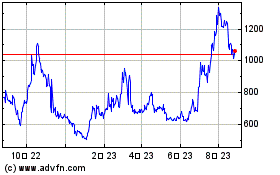 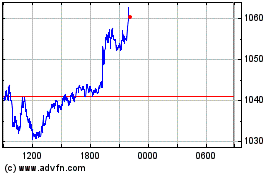