0.9112
-0.0007 (-0.08%)
リアルタイムデータ
マーケットオープン
0.9112
Cardano TVL Plummets To 8 Month Low, No Vasil Hardfork Positive Effect
2022年10月7日 - 09:38AM
NEWSBTC
Cardano has suffered a significant drop in its total staked volume since its March 2022 peak. The proof-of-stake blockchain has lost over 76% of its total value locked in the past eight months. The decline is alarming, given the decentralized crypto project’s recent Vasil hardfork.  The Cardano community welcomed the Vasil upgrade with high expectations. The hardfork was meant to upgrade the blockchain’s performance and place it in a position to contend with other top DeFi projects. However, it seems that the update hasn’t been able to deliver much bullishness for ADA holders. Related Reading: Why “Rosy” Earnings Estimates Might Hurt Bitcoin As Price Struggles At $20,000 Loss Of Staking Value For Cardano Based on data obtained from Defi Llama, Cardano’s total value locked (TVL) has continuously decreased since its March height. It has now fallen below $80 million for the first time since January 2022. More specifically, Cardano’s TVL was reported to be $76.66 million at the time of this writing. This figure reflects a 76.49% decrease from the all-time high of $326 million that it hit on March 24, 2022. This new figure has pushed the staking value of ADA to the levels it had in January 2022. Cardano is presently ranked 27th among all blockchains regarding the total value of locked (TVL). It is trailing behind blockchains such as Bitcoin (BTC), Algorand (ALGO), Polygon (MATIC), Avalanche (AVAX), and Tron (TRX). Ethereum (ETH), which now has a market value of 32 billion dollars, has a commanding lead. Can Cardano Reach $1? ADA and most other cryptocurrencies suffered through a gloomy month in September. However, crucial updates and strong token fundamentals suggest that ADA might be set for a breakthrough in October. This is generally a bullish month for the cryptocurrency markets. Nevertheless, it seems unlikely that Cardano will be able to reach $1 in the next four weeks. This is because major technical indicators like the RSI and MACD are below 50, signaling a negative trend. Cardano Making Waves In Other Areas Despite the fact that Cardano’s staking value has dropped significantly, there are some positive developments happening within the project’s space. For instance, Cardano is among the ten most popular cryptocurrencies picked by banks that disclosed exposure to the innovative asset class. The findings were reported by the Basel Committee on Banking Supervision (BCBS) of the Bank of International Settlements (BIS). Not only that, but Cardano has also been winning in the social media area. The number of daily social mentions of ADA had risen to a 90-day high of 52,470 as of September 23. This brings the total number of mentions to 2.32 million, as per statistics from the social intelligence platform LunarCrush. Related Reading: Calm Before The Storm? Bitcoin Volatility At Historically Low Levels Finally, Cardano has the support of several bulls who have expressed their confidence in the project. The cryptocurrency community at CoinMarketCap is positive on the price of Cardano by the end of October. Based on a poll, members have predicted that ADA would trade at $0.5873 at the end of the month. This was 36.77% higher than its $0.4294 price at the time of writing. Featured image from Pixabay and chart from TradingView.com
Polygon (COIN:MATICUSD)
過去 株価チャート
から 11 2022 まで 12 2022 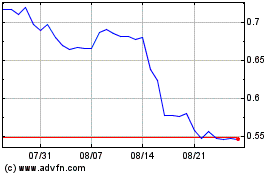 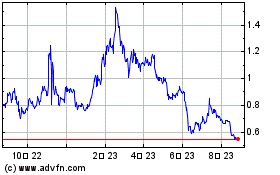 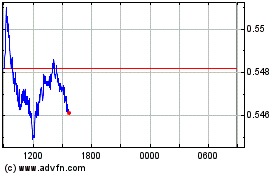