99.39
-0.500 (-0.50%)
リアルタイムデータ
マーケットオープン
99.39
Shiba Inu Facing Tough Hurdles For Weeks – How Could SHIB Overcome These?
2022年10月29日 - 08:05PM
NEWSBTC
Shiba Inu (SHIB) momentarily moved out of its bearish streak that’s been going for the past few weeks on October 25 when the crypto market made a rally to reclaim the $1 trillion market cap turf. SHIB went up by 10% since October 25 before its recent price correction Shiba Inu lost 2% of its value over the last 24 hours The crypto is still up by almost 8% for the past week In doing so, the Dogecoin spin-off crypto managed to upend weeks of being in a downward trend that’s been very brutal to the 14th ranked cryptocurrency in terms of market capitalization. SHIB, however, wasn’t able to sustain its upward trajectory as it once again made a step back for the past 24 hours. At press time, according to tracking from Coingecko, Shiba Inu is trading at $0.00001070. It’s been down by 2% over the last day but is still up by 7.9% for the past week. Shiba Inu Price Chart Hints At Another Price Correction SHIB’s 12-hour chart shows price trend is swinging sideways and there is no definite consolidation on a bullish region. Source: TradingView The altcoin did manage to increase by up to 10% since October 25 but has suffered price correction over the last few hours. Its Relative Strength Index (RSI) was leaning towards a bullish movement during that time but the current price movement says otherwise. If Shiba Inu fails to rebound from this minor price dump, the crypto might find itself on a downward movement once again. It’s also a surprise that Dogecoin’s momentum is no longer helping SHIB right now considering DOGE witnessed a significant price surge just moments after Tesla CEO Elon Musk took over Twitter. Related Reading: Why Bitcoin (BTC) Could Not Surpass Litecoin (LTC) In This Key Area Three Main Hurdles For SHIB Frustratingly, Shiba Inu repeatedly tried and eventually failed to build up enough momentum to push its price to higher levels. Experts believe there are three problems that are standing in the way of SHIB to move even just an inch closer in realizing its developers’ dream to flip Dogecoin.  The first issue is that its circulating supply remains highly concentrated as more than 63%of all available SHIB tokens are being held by just 10 wallets which could be owned by fewer than 10 individuals or all by one person. Shiba Inu still has limited case uses as of this time as its most significant use is being a method of exchange. Moreover, there are only 112 merchants that accept the altcoin as a mode of payment. The asset’s network development roadmap is also not clear as there is no definite direction for where it is headed. It’s probably one of the reasons why investors are veering away of the crypto, shifting their focus and resources to assets with well-planned path that ensures ROI and profit. Related Reading: ETH Breaches $1,500 Level As Ethereum Adds Over $20 Billion To Its Market Cap SHIB market cap at $6.41 billion on the daily chart | Featured image from CryptoGlobe, Chart: TradingView.com Disclaimer: The analysis represents the author's personal knowledge and should not be construed as investment advice.
Litecoin (COIN:LTCUSD)
過去 株価チャート
から 1 2023 まで 2 2023 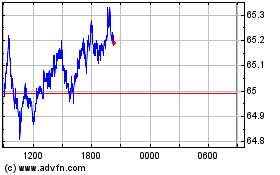