5.20
-0.100 (-1.89%)
リアルタイムデータ
マーケットオープン
5.20
Polkadot (DOT) To Retest $9.88 Resistance – Can Bulls Regain Solid Footing?
2022年8月14日 - 03:40PM
NEWSBTC
Polkadot (DOT) price reveals that the extreme bullish movement pumped the price reaching $9.54. DOT price extremely bullish; set to retest $9.88 key resistance level. Support spotted at the $9.29 zone. Polkadot pumped up its price to $9.54.  DOT’s price trendline has spiked for the past couple of weeks following the coin’s overwhelming gains over the past few days. Today, DOT/USD is trying to test the $9.87 key resistance level which is pretty strong. However, if the bulls continue to push further then DOT will have no problem breaching this critical resistance zone. Related Reading: Filecoin Cruises Near Resistance, Now Attempts For A Breakout DOT Price Pumped To $9.54 On the 24-hour timeframe, DOT price has shown a boost in price value as it pumped its price to $9.54 a few hours ago. According to CoinMarketCap, DOT is now trading at $9.49 or showing an impressive spike of 2.20% as of this writing. DOT price was down by a trickle in a few hours but is still on the green lane. The DOT/USD pair has shown a remarkable 10.05% gain in terms of value as seen in the past week which hints a continuation of the bull run. On the flip side, trading volume for DOT tremendously fell by 12.66% which shows some weak spots in terms of momentum. DOT/USD pair shows increased volatility as seen in the expansion of the Bollinger bands. The price is seen to be trading the upper limit with $9.99 as the current key resistance, and the lower band or $6.84 poised as the current support zone for the coin. More so, the EMA is spotted at $9.10 with RSI at 64 which is indicates strong buying pressure in the market. Polkadot Price Correction Anticipated The 4-hour timeframe shows that DOT price breached upwards which was observed at the onset of the trading session which prompted the price to spike to $9.58, but when the selling pressure resurfaced, the price also went down in the last few hours. The 4-hour chart for DOT shows a rather very mild volatility. The upper band is spotted at $9.84, while the lower band is found at $8.73. More so, the EMA trades at the $9.35 level with the RSI showing a mild downtrend as it continue to trade at index 62 propelled by the immense selling pressure. DOT price reveals that the coin is working extremely hard to override the key resistance found at $9.87, as the price is still seen trading on the green. A price correction is expected for short-term or in a just a few hours before the coin retests the key resistance zone again. On the other hand, if the bears manage to dominate the bulls, then DOT may hold on to $9.29 as its next support zone. Related Reading: Decentraland Consolidates Near $1.05 – Can MANA Attract Buyers Now? DOT total market cap at $10.3 billion on the weekend chart | Source: TradingView.com Featured image from Bitcoin Addict, Chart from TradingView.com
Filecoin (COIN:FILUSD)
過去 株価チャート
から 1 2023 まで 2 2023 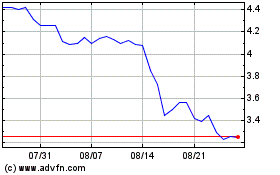 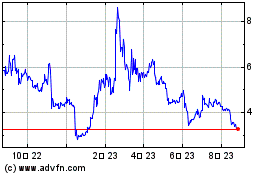 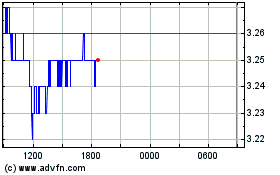