6.92
-0.010 (-0.14%)
リアルタイムデータ
マーケットオープン
6.92
This Little Known DeFi Token Is Attracting Investors – Find Out Here
2022年10月7日 - 05:50PM
NEWSBTC
This DeFi token, which only ranks 138th among cryptocurrencies according to total market capitalization, is starting to make some real loud noise in the crypto space this ‘Uptober.’ Even though the market continues to struggle to recover from its dismal September performance, SUSHI – the native token of SushiSwap – is making impressive leaps over the past couple of days. At press time, according to data from CoinGecko, SUSHI is trading at $1.33 and has been up by 3.5% for the past 24 hours. It currently carries a 20.1% price increase for the past seven days while its performance for the past 30 days has been equally impressive, recording a 15.5% uptick in value. While it is still in the lower ranks of cryptocurrencies due to its $255 million market cap, SUSHI is currently the subject of tremendous interest among investors. Related Reading: Hedera: Investors Should Check Out These Data Before Buying HBAR SUSHI Sounds Delectable To GoldenTree Asset management powerhouse GoldenTree recently announced it has invested $5.3 million to SUSHI – a move that was instrumental for the governance token’s recent bullish rally. During a SushiSwap forum held last Wednesday, the firm admitted they have been following the digital asset for a while now and that they are more excited about it with the upcoming rollout of their crypto-focused GoldenChain Asset Management Arm. GoldenTree went on to say that the crypto asset has incredible potential and that it “represents the best of DeFi, both in origin and in community.” The $50 billion privately owned asset manager has full trust in SUSHI as it iterates and innovates “without artificial barriers to completion.” DeFi Token No Longer Just A Clone As a digital token, SUSHI had a hard time earning respect from crypto aficionados as it was created as a copy of Uniswap. Although it attempted to be better than the asset where it was based through liquidity mining and governance features, the token ended up lagging behind its competitors. But the $5.3 million GoldenTree investment speaks volumes of how much interest the digital currency is now commanding. The multi-billion dollar company did not dismiss the challenges that plagued SUSHI in the past but at the same time said they are amazed by the resiliency of the core team and the asset’s community of supporters.  GoldenTree took notice of the top-tier products that SushiSwap has built and released, becoming one of their reasons for the game-changing investment. Related Reading: Polkadot Seeing Lots Of Development Activity – But Why Is DOT Stuck In The Cellar? SUSHI market cap at $168 million | Featured image from Japan Centre, Chart: TradingView.com
Polkadot (COIN:DOTUSD)
過去 株価チャート
から 1 2023 まで 2 2023 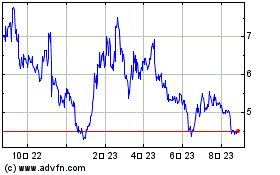