37.35
-0.450 (-1.19%)
リアルタイムデータ
マーケットオープン
37.35
Algorand (ALGO) Undermines Crypto Bloodbath, Adds Over 27% In A Week
2022年9月24日 - 06:02AM
NEWSBTC
This week has been eventful in the crypto market. Many cryptocurrencies have recorded massive losses since Monday, September 19. The Merge on September 15 kickstarted another downtrend for crypto prices. Afterward, CPI data made the feds hike the interest rate by 75 basis points, sending assets price downwards.  Related Reading: Bitcoin aSOPR Profit-Loss Junction Continues To Act As Resistance But as these macroeconomic factors push many digital assets down, others resist the pressure and move forward instead.  Algorand ALGO is one of these assets, recording price gains in its 24 hours movements. But BTC and ETH haven’t fared well. For instance, on September 20 and 21, Bitcoin lost its grip on $19K, falling to $18K.  On September 22, BTC climbed again to $19K, an intraday high, and did not hold on to that level till press time. Currently, the BTC price is again bounced to $18,914, representing a 1.91% loss in 24 hours.  Algorand’s ALGO Not Affected By Macros While many cryptocurrencies bleed, ALGO is recording positive price movements. Currently, the ALGO price is $0.3761 on TradingView, and CoinMarketCap shows a 2.48% growth in 24 hours while 27.98% in the last week. So far, ALGO price movements are all green, as seen in the chart above. The coin started an upward climb since the close of the market on September 17. It jumped from $0.2973 to $0.3109 the same day.  On September 18, ALGO lost some of its gains to close the market at $0.2925. But a few hours later, the coin jumped again and closed the market at $0.3172 on September 19. Since then, to press time, ALGO has continued its upward movement.  It climbed to $0.698 on September 22 and is today trading at $0.3767. So far, the ALGO price movement shows a continuous price gain for three consecutive days.  Analysts have also pointed out that ALGO’s moving average convergence divergence is positive. Also, the coin’s RSI (Relative Strength Index) is at 58.18, showing that ALGO is closing to the overbought region.  Why Is ALGO Surging  Even though the crypto market is negative, a lot is happening in the ALGO ecosystem. Currently, the total volume locked on the ecosystem has grown considerably. The DeFi blockchain is recording massive interest, evidenced by the $244 million worth of TVL.  This figure was its data as of September 22 after adding 4.09% growth in its TVL. Data also reveals that $100 million out of this liquidity came from AlgoFi.  Apart from growing TVL, Algorand has made partnerships. The prominent one recently is the FIFA& Algorand partnership enabling the crypto network to FIFA+ Collect. This platform is where users will buy NFT items of many types.  Related Reading: Compound Prepares For A Major Rally To $80, Here Is Why According to the details of FIFA+ Connect, the platform will operate like NBA Top Shot. Its users can purchase artwork, highlights, images, etc., from prestigious soccer competitions. The platform will launch before the World Cup, slated for November.  Featured image from Pixabay and chart from TradingView.com
Compound (COIN:COMPUSD)
過去 株価チャート
から 10 2022 まで 11 2022 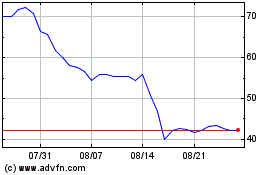 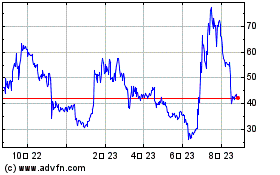 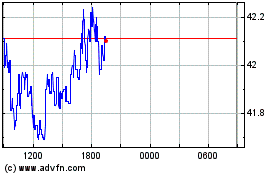