10.20
-0.300 (-2.86%)
リアルタイムデータ
マーケットオープン
10.20
Cosmos (ATOM) Price Swells 12% – Can It Breach Resistance?
2022年6月24日 - 09:25PM
NEWSBTC
The price of Cosmos (ATOM) has not been left behind by the present cryptocurrency rally. ATOM is currently trading at $7.66, its highest price since the middle of this month. Since its low point in June, the token’s value has increased by about 40 percent. ATOM is currently positioned to surpass $8.4 resistance, which may solidify a bullish trend. The token also reached its highest level in 11 days on Thursday, as prices increased for the fifth straight session. Since the broader crypto market has been in a sea of red recently, ATOM has followed suit. After a dismal 10-week weekend, though, buyers are observing some encouraging signs. Cosmos (ATOM) Hosts dydx On Its Platform A lot of attention has been paid to $ATOM with the revelation by dydx that they will be building their V4 blockchain on the Cosmos platform. Suggested Reading | Stepn GST Token Slides 97% – Despite Fitness App Having 3M Users In their disclosure, dydx praised Cosmos. They said that the V4 protocol’s most crucial characteristic is its total decentralization. The V4 protocol contains a fully decentralized, off-chain orderbook and matching engine. The Cosmos platform, according to dydx, allows them to expand to a substantially higher number of orders and cancellations per second. Cosmos is one of the largest and most significant blockchain-based platforms. It employs the Inter-Blockchain Communication (IBC) protocol to guarantee that different cryptocurrencies can connect with one another. ATOM total market cap at $2.35 billion on the daily chart | Source: TradingView.com Cosmos, often known as the Internet of Blockchains, specializes in enabling businesses to create their own independent blockchain. Each blockchain will make its own decisions autonomously while being driven by the Tendermint consensus. Cosmos also created a product called SDK, which has been utilized in numerous applications. Terra, the platform that collapsed in May of this year, was the most noteworthy project inside its ecosystem. ThorChain and Osmosis are two other notable projects developed with Cosmos SDK. Suggested Reading | Bitcoin Steady Above $20K After Drop To $17K – A Slow Climb To Green? ATOM bulls have re-entered the market in high gear following last week’s breach of its $5.50 floor, which saw prices reach their lowest level since January 2021. Earlier Thursday, the ATOM/USD reached an intraday high of $7.73 because to this short-term increase in optimistic sentiment. The market capitalization of ATOM coin is currently well above $2.1 billion, up 13.4 percent in the green zone over the past 24 hours according to CMC statistics. In the face of a positive momentum, there is a modest increase in trade volume. Similarly, trading volume increased by 142% compared to the previous day. However, the bulls still require additional volume to breach the negative trend line. Featured image from Exodus Wallet, chart from TradingView.com
Cosmos Atom (COIN:ATOMUSD)
過去 株価チャート
から 11 2022 まで 12 2022 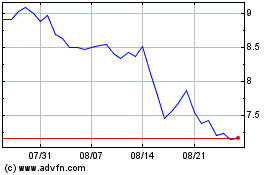 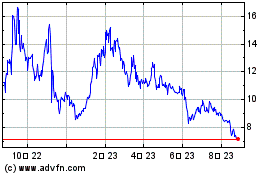 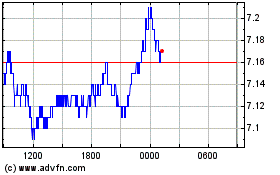